Portsmouth EDL March: a bit of a damp firework. 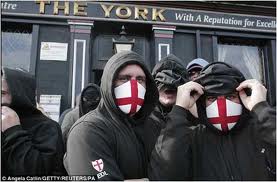 In the run-up to the EDL march there was considerable tension in the air. Not just due to the fact that the EDL were attempting to foment divisions in Portsmouth but also due to the fact that physical threats had been made on Facebook to figures in the Anti-Fascist movement.Jon Woods a leading Socialist and Anti-Fascist had received threats via Facebook and the police had become involved.

Videos of proudly Nazi band No Remorse performing "Smash the Reds" had been posted by the local EDL organiser(who lives in Bath)on to our Facebook page. There had also been threats that a pigs head would be thrown over the wall of the proposed Muslim School.

After attacking Muslim places of worship in Portsmouth,they are now targeting Schoolkids.

That's about their mark.

This was flagged up as their Unity demo.This was to be the day that the South Coast far right was going to unite to prepare for Tower Hamlets on the 7th Sept.

English Volunteer Force ,South Coast Alliance and March for England amongst others were to come together against the Muslim School as a unified  fist against Islam.

They had announced they  were expecting 4-500 to attend.

Some Fascist groups were anticipating even higher figures.

UAF had maintained from the outset that if the EDL were to march and protest outside the site,then we would come down and protest in solidarity with the religious freedoms of the Muslim community and against the EDL outside as well.

We agreed a protest site with the Police, after a bit of wrangling, opposite the School facing the EDL,much to the anger of the EDL,who seem to think they have not just a right to march, but to march without opposition.

Apparently they felt  they could demand we protest elsewhere.

UAF assembled at the Fountain at midday.There were about 150-180 of us.Not just the usual attendees of our demos like Unison, Pcs and the teaching unions but also many people who had never turned up before. At 12.30 we marched down to the site .Significantly we did not just get support from passers by ,but people from the housing estate behind came out to voice their support for our protest.

When the EDL finally ambled their way from the pub they had "mustered" at ,it became pretty clear that this was not to be their finest hour.On the way there they threw lit fireworks at the houses they were passing and one of them was arrested for throwing a blazing firecracker into a policewoman's face.
The Police put the figure for their turnout at around 50.They are claiming 200. The figure of about 100 I think would be fair to the point of being generous.

The Portsmouth News video gives a flavour of proceedings.


Their turnout was bad and their conduct was incomprehensible.

Chucking fireworks at the homes of  local working class people.

Is this Portsmouth EDLs idea of outreach?

The EDL are Fascists.

We call them that and thankfully our local newspaper Portsmouth News calls them that also.

We managed to maintain a lively demo throughout, the undisputed star of our protest was a young schoolgirl,CJ who for over half an hour took command of the megaphone declaring "I love all communities and all sexualities!"


It certainly isn't the children of Portsmouth who are filled with hate.


After their speeches and a few scuffles between themselves and the police they ambled there way back to the pub.

This was important.Our protest against them when they held their 50 plus march for Lee Rigby was very poor, we only mobilised 40,and this protest clearly saw a revival in our support.

We were on the day able to chant "There are many, many, more of us than you !"

This had added poignancy,as this was the road where we stopped the NF from marching down in the early eighties ,and we effectively blocked their rise in Pompey  and smashed them.

This was a very significant day for us ,and the general feeling was that we had inflicted a significant defeat upon them ,their blogs are not crowing ,and it is generally felt  that this was a victory for us  and they have  now gone rather quiet .

One local EDL activist posted this in a response to a comment about the spirit of  unity on their demo:

The main purpose of their demo had little to do with the Muslim School .Obviously they despise Muslim Schools.However, in reality the schools issue was what Alfred Hitchcock called a MacGuffin, in that was a peg to hang the demo on.

They plan to invade Tower Hamlets on the 7th.

The reality was that for the South Coast Fascists ,the road to Tower Hamlets lies through Portsmouth.

Even with bringing people in from Weston Super Mare ,Bournemouth and elsewhere they had a risible turnout.

This has given Portsmouth UAF a huge boost in building for Tower Hamlets on 7th September.

Anyone wishing to attend the demo on the 7th please get in touch with us.
Portsmouthuaf@gmail.com

Pompey Against The Nazis

Promote Your Page Too